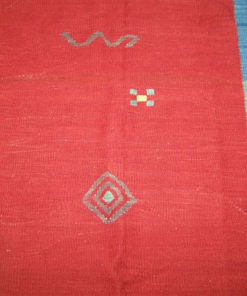 This Kilim has wonderful rich red base.

DOBAG is the project for the revival of the natural dyeing techniques in parts of western Anatolia.

This project was started in 1981 by a Chemist from Germany called Dr Harald Boehmer. He could see that the knowledge of natural dyes was fast being lost and decided to do something about it.

This is a flat weave kilim. It measures 170x134cm. It is made in Turkey from 100% wool and dyed with natural traditional dyes

DOBAG is the acronym of a natural dye research and development project – in Turkish “Dogal Boya Arsatirm ve Gelistirn Projesi”. It grew out of an extensive research programme on antique carpets which led to the rediscovery of the original natural dyes and the methods involved in producing them.

Antique nomadic rugs are famous for their powerful designs and wonderful natural colours. But over the last 120 years synthetic dyes and commercial pressures have displaced the traditional values and techniques. Today new Oriental carpets are almost exclusively dyed with poor synthetic colours, made worse by damaging chemical treatments. Patterns and colours change according to fashion and each design is produced in multiple numbers, turning the once exclusive Oriental Carpets into mass produced furnishings of no lasting value.

It was against this background that DOBAG was started in 1981 to see if genuine carpets of original design and quality could once again be created. Run as a co-operative by the village women, a successful cottage industry was established where, at its peak in the late 1990’s, 350 families from 35 tiny villages were members.

During this time some very beautiful and totally original pieces were woven. Signed and sometimes dated by its weaver(s), these rugs had superb hand spun wool, dyed with perfect natural colours, each one unique as no cartoons were allowed. DOBAGs were hard wearing, colour fast and stunning rugs that could be repeatedly washed, like antique rugs, and therefore set to last for generations.

It is now 35 years since DOBAG was started and many changes have taken place since its peak. Financially these families were now much better off and able to send their children to proper high level education. As a result, few young villagers now have any interest in pursuing a career weaving carpets, despite being paid considerably more than in the past.

10-15 years ago I could select the best examples from ready stock at DOBAG. Now, almost every piece has to be ordered in advance, at a much higher price than before, involving many months and even years of weaving time before shipping. Therefore I am instead focusing on finding “old” DOBAG gems, some of which have by now acquired a wonderful patina. I have no doubt that the best DOBAGs are future collector’s items and that the DOBAG project, as predicted, has been a short lived but very important part of carpet history.

There are no reviews yet. 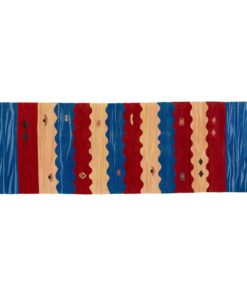 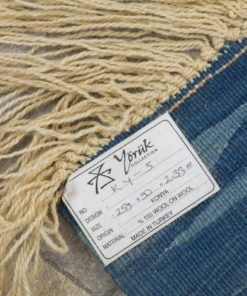